Panama City, Panama 2016
A week's peek to consider it for our 2017 winter location.
AND, it looks pretty darn good. (Story and pictures below)
Flying into Panama City gives a great view of the canal. 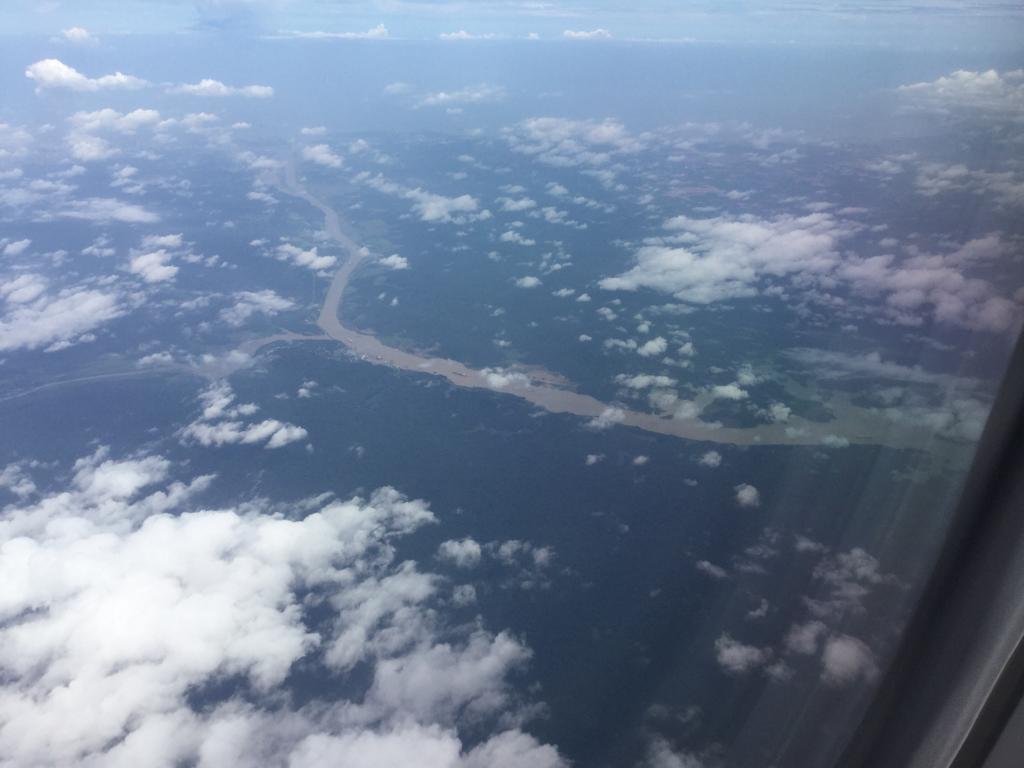 July 24 -- To Panama!
This afternoon, we flew to Panama City, Panama via Houston to investigate a few apartments we'd been researching as a possible location to bunk in for the winter of 2017.

July 27 -- In Panama
Arriving midday, we flew into Panama passing the Panama Canal on our left just ducking in under a wild lightning storm. With just carry-on luggage, we slipped into a cab and for USA$30 were deposited in front of the brand new Las Americas Golden Tower hotel in the heart of Panama City on Avenue Balboa. The hotel had just opened following construction -- a beautiful modern place in the heart of the action. Using Skype, I confirmed our meetings with various representatives so we'd be ready for our apartment tours in the morning. With that task done, we stepped out into muggy street (after all, it's the rainy season here). Setting off on foot, we explored the city of 1.5 million people, but only the immediate area, since the weather made walking very labourous. We were in the heart of the city and the heart of the banking area of Panama City and full of fast-moving cars, lots of honking and hustle bustle.

The next morning, we stepped out of the hotel, climbed into the first yellow taxi we'd flagged down, which took all of about five seconds, since they're everywhere. The driver kindly became our guide around town for the next few hours waiting for us as we toured the various apartments. Directions given to us by the real estate representatives were less than usable and if it weren't for our driver carrying a cell phone, we'd still be looking for the first location. After viewing six places, we made our selection and await confirmation. Most places are looking for long-term renters (six months of more) and we're after three months making it hard for the agent to confirm with us right away.

The apartment that we'd settled on is located on an island connected to Panama City by a long causeway. Our balcony and bedrooms look out onto the Panama Canal entrance -- so close, that we can almost see the whites of the captain's eyes as they pass.

Feeling confident that we'd done all we could for the time being, we spent the rest of our remaining time -- our last full day in Panama City -- touring on foot, the old city called, "Casco Viejo". It's a 17th century French-fortress-styled area with 19th century mansions and 20th century art deco. It was at one time a dangerous place to walk around, but now with reconstruction happening and lots of police presence, it's a fabulous place to be a tourist.

Most everywhere you go by taxi within Panama City costs about $3 to $5 by taxi. There's no need to rent a car, since the driving is manic there.

On our last day in Panama, we took our time over breakfast watching a beautiful tall woman with a chaperone at a table not far. I noticed she caught the eye of every single man in the room, and woman too. She seemed very unpretentious, as if unaware of her beauty. A few hours later as we rode the elevator, the doors opened and the same woman entered our car wearing Miss Columbia across her shoulder. We both told her a few times how beautiful she was -- we couldn't help ourselves -- she was! Later we learned that this was the woman who was crowned Miss Universe for all of 4 1/2 minutes until the host apologized taking the crown back to give it to another woman. He'd made a mistake! Miss Columbia was in the hotel on official business to promote Columbia to a convention room full of people.

We flew back to Canada again through Houston, feeling quite content that Panama City would be an excellent place for us to explore a new culture and country while Big Sky sits on the hard in Kilada, Greece.