This page diaries our 2018 trips to visit our daughters and family in the USA and Canada.
Above, our grand daughter Hailey AKA “The Mermaid” in their backyard pool.
March 23 — Rough Landing in Houston
We left Istanbul in high spirits, enjoying the business-class lounge in Istanbul having bought our flights on points. The flight was comfortable, fabulous food prepared by a chef, lay-flat seats, great entertainment. After 13 hours though, we were anxious to land and because it was late, we were excited to have it all go smoothly. In other words, luggage roll off the ramp, car rental ready, route set on the GPS, so we’d arrive in Conroe, an hour and a bit away by car. It didn’t appear outside the plane windows that there was a lot of wind, but the plane laboured on its approach, with the wings seemingly flapping and the plane rotating side to side far beyond the usual landing style. Then, there’s that moment when you hold your breath waiting for touchdown, it came with a bang, landing on the left wheel. Things inside flew to the left as the plane tipped, righting itself with another hard bounce, on the right wheel, then the nose slammed down hard. The pilot was not in control of the plane at this point, as it moved around the runway and in the next breath, we were slugging our way up into the overcast skies. Inside the plane was deathly quiet until we heard nervous laughter. Odd, I thought, because I was trying my hardest not to cry from my fear. We circled again, and when we lined up to approach the landing strip again, I wondered a million things, but especially whether the tires were still inflated and the wheel legs not shattered. We did land the second time without a hitch. There were about twenty wheelchairs waiting at the gate, likely the procedure when there’s a situation as we experienced.

March 26 -- Played in the pool all day
First thing in the morning, we were in the backyard playing in the pool or on the trampoline. It's a fantastic life for kids and adults, fresh air, sunshine, water, birds, and even a dead copperhead baby snake in the street. By afternoon, five neighbourhood kids arrived on invitation and it was a day filled with non-stop activities. 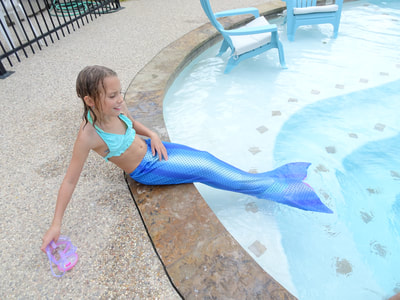 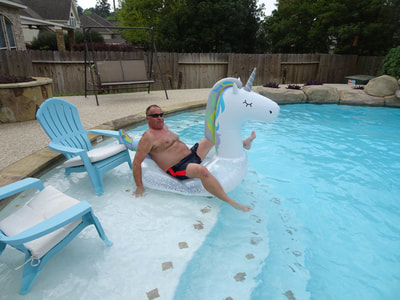 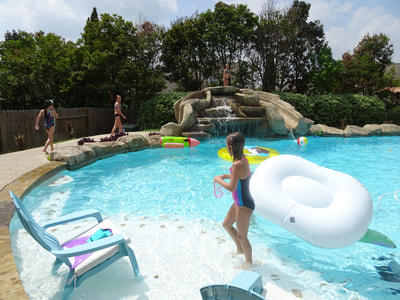 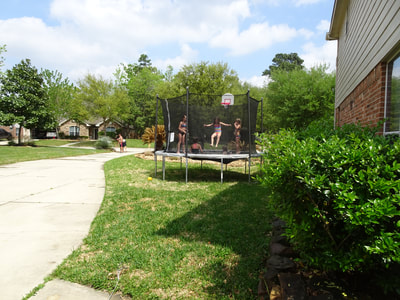 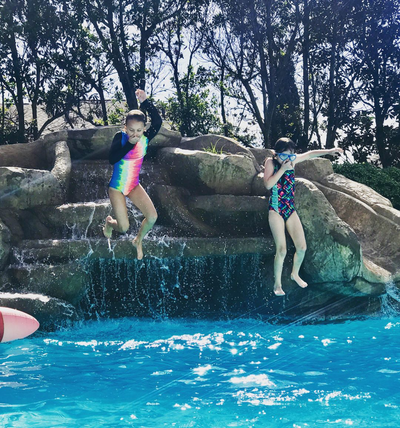 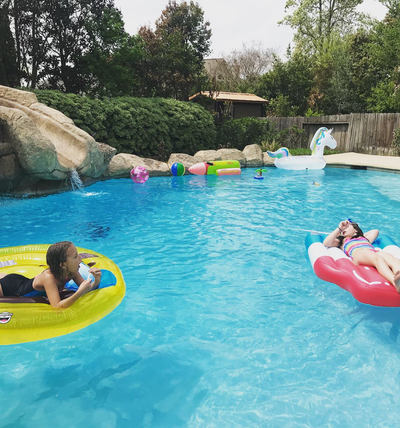 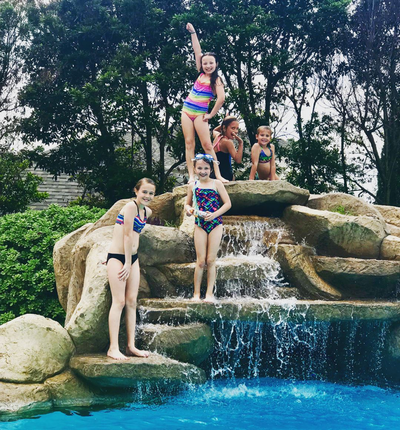 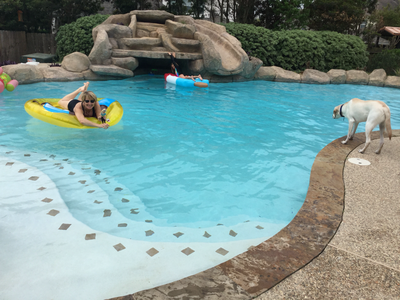 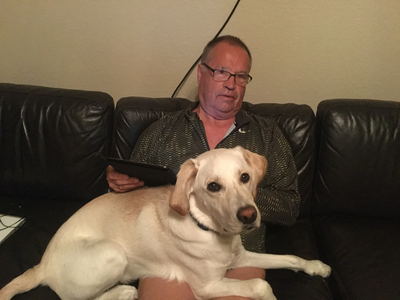 April 4, 2018 — To Canada
It was hard to get back on the horse so to speak, getting back on our plane for Calgary after our Houston landing. We left Houston in a torrential rain storm, arriving in Calgary in a snow storm, quickly exchanging shorts for winter coats, boots, scarves, and mitts. With barely a second breath, we were off to spend time with our Canadian families in Calgary, Red Deer, and Carrot River). Exhausting? Absolutely! We never say "no” or “maybe later” to the grand kids since our time with them is irreplaceable.
Our visits in Canada shift between Calgary and Red Deer (1.5-hour drive apart) and a nine-hour drive to Carrot River, Saskatchewan, a province east of Alberta. Below, photos taken from the newspaper of the hockey team involved in the tragic bus/truck accident just 30 minutes from Carrot River. The horrendous crash has touched the lives of people around the world. It happened at a highway intersection we've traveled through many times. A bus load of Humbolt Bronco's players, coaches, a radio reporter, and a sports therapist were on their way to the play-off game when a double tractor trailer carrying peat moss came through the intersection killing 16 aboard the bus and injuring the rest except two players. Hockey in small town Canada is the lifeblood of everyone living there, whether you have children or grandchildren playing the game, everyone attends and everyone knows everyone. We are wrapping our love and good thoughts around everyone touched and in pain, from the surviving players, families who lost their loved ones, friends, the first responders, and to the medical professionals involved.  The photo on the left, the boys have bleached their hair blonde calling it "play-off hair" and right three survivors in the hospital. 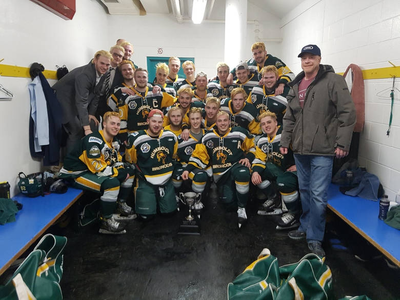 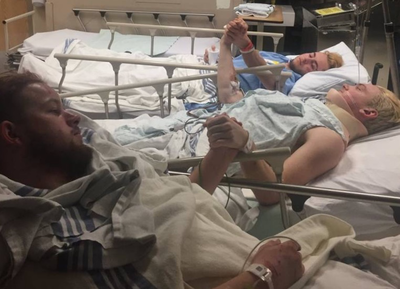 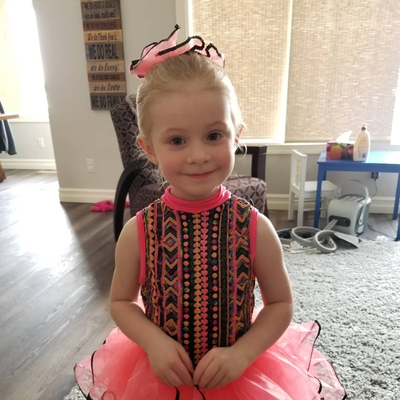 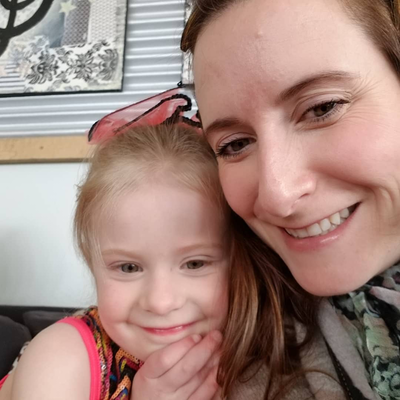 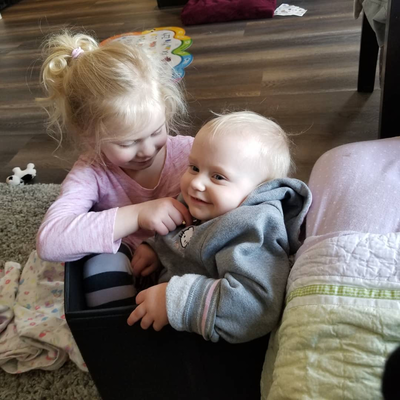 April 17, 2018 — Back To Spain
Rising at 5 am, we climbed aboard our flight to Montreal, taxied to the de-icing station, and departed the snow-filled province. We entertained ourselves for five hours in Montreal before departing for Frankfurt luckily arriving 15 minutes early. We needed every extra minute to get to our next flight having been caught behind a number of Russians getting a thorough interrogation at the Immigration desk. With our departure time narrowing, agents continued to look through the Russian's cell phones, questioning them over and over, and some being escorted to separate rooms.
​In sunny Madrid, we rented a car and carried on with our marathon-like return to Big Sky in Cartagena. Our 4 1/2 hour drive became 5 hours with a roadside sleep half way there. The click click of our suitcases on the pier never sounded so good, knowing our comfy bed was moments away. Big Sky was buried in thick Sarah’s Dessert sand which has arrived with the south rains while we were away. I took off the window coverings, storing them in the enclosed winter house for their thorough washing in the morning.
Button to 2018 Spain by Land 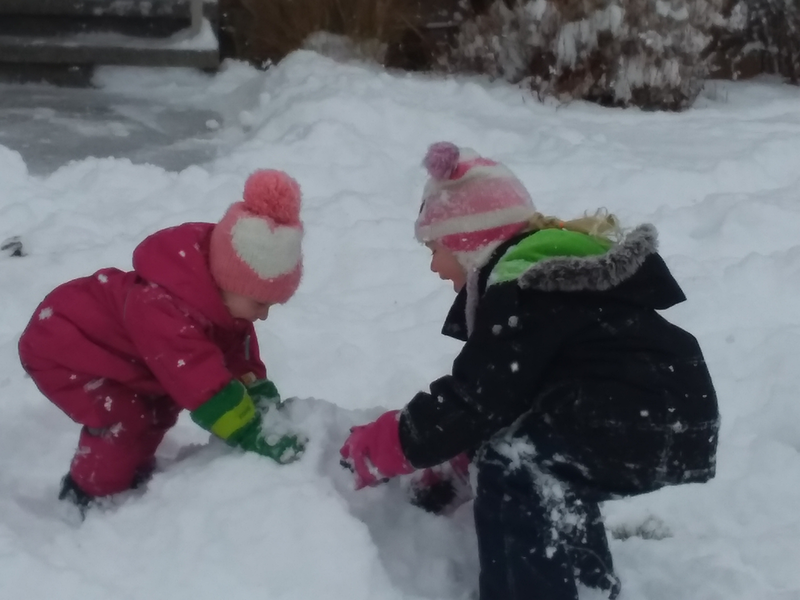 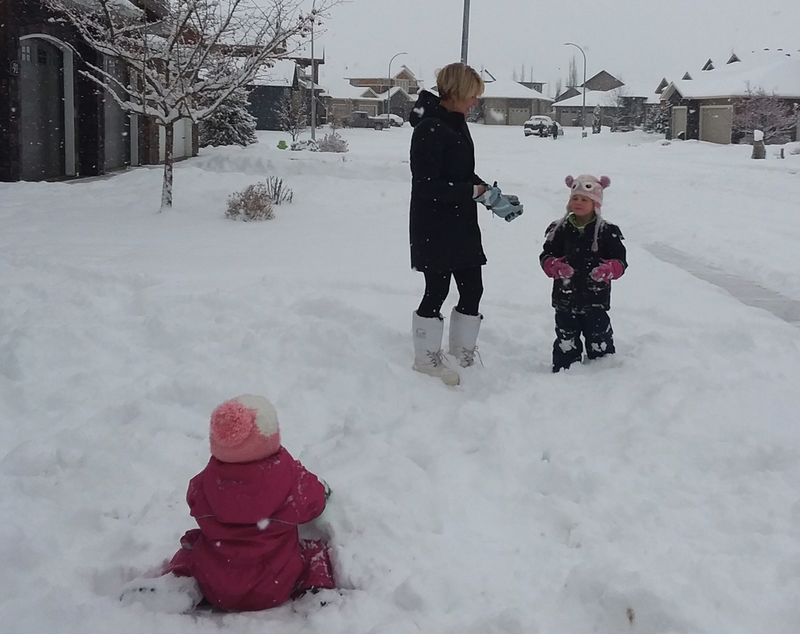 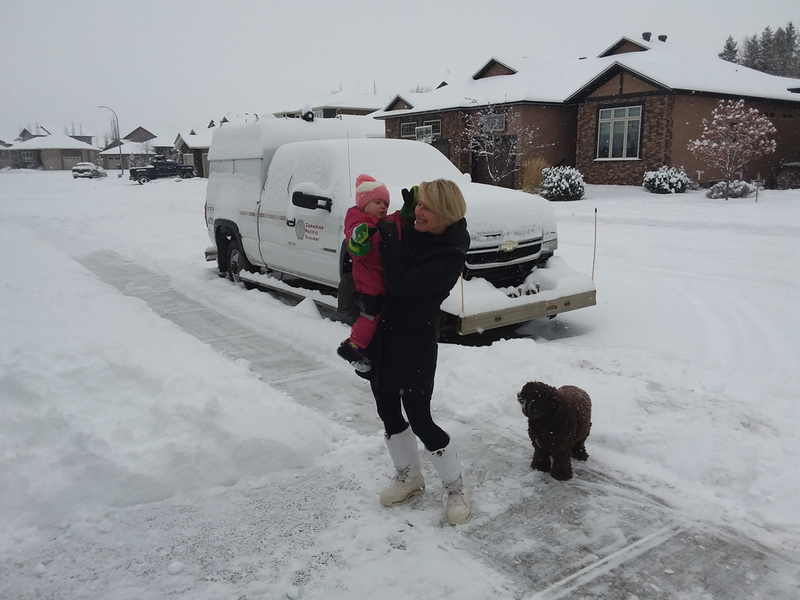 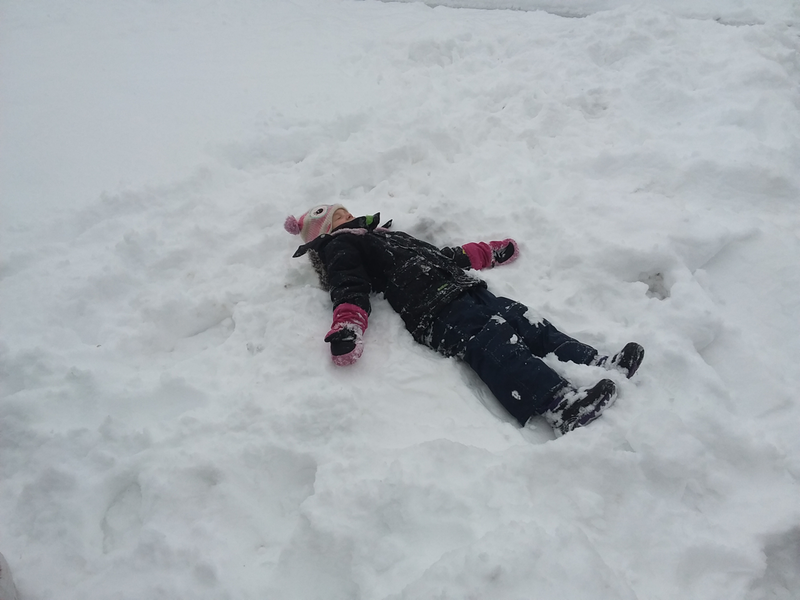 November 29, 2018
We staggered our arrival in Canada so I could go to Red Deer to help out with Lindsey and Les' busy household. A few weeks later, Con flew from Lagos through Istanbul to Houston, and met me, as I'd flown in the day before from Calgary. Con and I took a drive down to Galveston, a coastal city and port on the SE end of Texas on the Gulf of Mexico. It's on an island, and you get there by train bridge or road bridge to get there. In 1900, they had one of the deadliest hurricane's in USA history, killing 6,000 - 8,000 people. The houses are built on stilts. It's not a place we'd like to live. We spent 11 days with Courtney, Mike and Hailey in Conroe before returning to Calgary and Red Deer. Con drove to Carrot River mid November to be with Brit, Kris, and Nolan. Lindsey and I, along with 4-year-old Kate and Amy, nearly 2, had planned to follow later that day, but ran into a situation that had us return to Red Deer. That afternoon, we took the kids to the public swimming pool, since we'd promised them a pool with a slide in Saskatoon (our planned first day stop). Kate was thrilled that she stood as tall as the dolphin, which measures her height to allow her to go down the enormous slide on her own. She has no fear, and made nearly a dozen climbs to the top and winding down down down into the skinny pool at the bottom. With Con and my planned appointments are now completed, so for the next few weeks we're booking dates with friends. This Saturday, is Amy's 2nd birthday party, followed with mine on Monday, so we'll be able to get in more family fun times together.


Below: Kate and Amy entertained us while we babysat.
December 9th, the CP Holiday Train arrived in Blackfalds 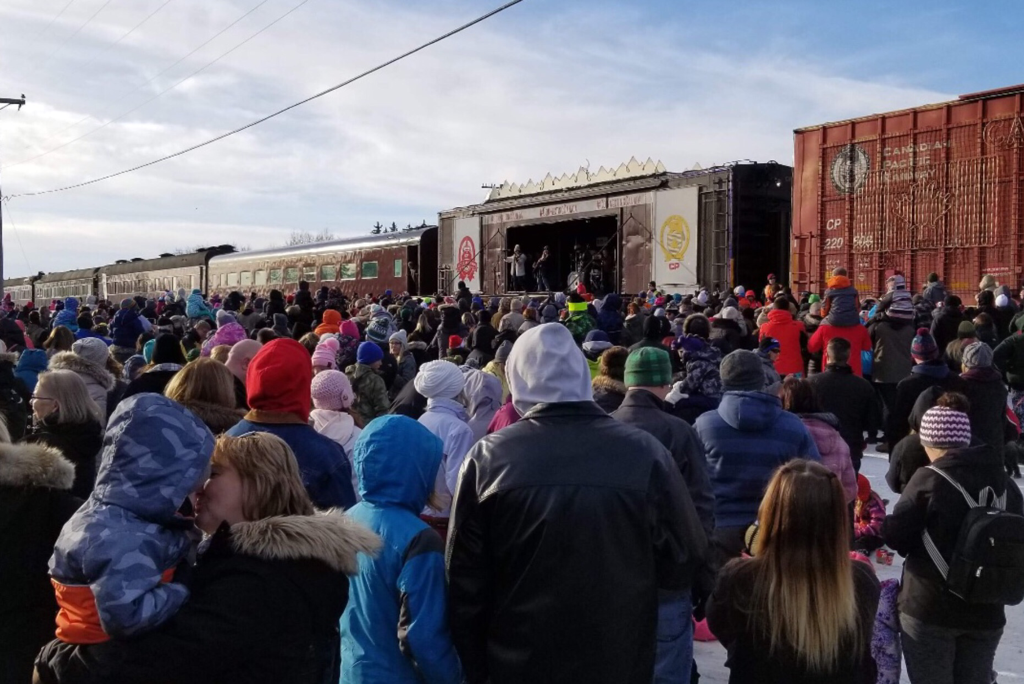 December 9 — Nick, Dex, puppy Tank, Con and I drove to Blackfalds just outside Red Deer, and met Lindsey, Kate, and Amy enjoying an afternoon hosted by the CP Holiday Train. Con and I donated bags of food for the Food Bank, as the annual CP Train collects the donations as it makes it way across Canada. See the link: globalnews.ca/news/4745097/cp-holiday-train-calgary/
While in Conroe, Hailey managed the double flips. She’s a natural, having just started gymnastics a half a year ago. Below, our grandson Nolan on his Saskatchewan backyard skating rink.