April 26 to May 8, 2017 -- Land trip in Poland
We flew from Calgary to Paris, connecting to Warsaw arriving 24 hours after departure -- not unusual for us. We've switched from "thank you" to "merci" to "Dziękuję Ci" pronounced jinggueesh kee. Arriving at dusk, we took a taxi to our apartment in the newer "old" district of Warsaw. The driver multi tasked reading and viewing both photos and stories about Madonna and Halle Berry while negotiating traffic. Pushing open the door to our 750-square-foot apartment, we parked our two larger-sized suitcases. The carry-on bag we each pull behind hold all we need. The apartment is beautiful and comfy and the breakfast is supburb. Following a quick load of laundry, we set out on foot armed with our camera and an umbrella to "soak" in the historic city.
April 27 -- Day One
Putting many kilometres under foot, we walked to the Old Town, about a 30-minute enjoyable stroll, despite the rain. Warsaw has been the capital of Poland for more than 500 years showcasing many architectural treasures from political buildings to churches and palaces. The composer Chopin was born here and is remembered with parks, monuments, and a museum showcased in a palace. Like many buildings destroyed during WWII, the Chopin Palace Museum was another building reconstructed to look as it was then. Scientist Madam Curie had her successes here in Poland and is honoured with monuments as well. We clearly saw the Old Town's captivating charm and elegance through the rain drops.
Founded at the turn of the 13th century, the Market Square (panorama photo below) used to be the main square in Warsaw where citizens enjoyed celebrations and executions alike. Today, it's a beautiful square of medieval five-story buildings of various shades of pastel encircling the cobble-stone square with outdoor coffee shops and cafes.

At noon, we slipped into one of the many Catholic churches for a brilliant organ concert. The cost was 30 Polish Zloty (PLN) the equivalent of CND $10 each. We pay 0.35 Canadian dollar to the Zloty. (Small sample of the concert below.)
Castle Square below used as the residence of the rulers from the 16th century. It was completely destroyed during WWII and rebuilt through common efforts of the city's residents. On display inside are two original works by Rembrandt. (See below for the Rembrandt portraits.)

Stopping for an Irish Coffee for me, ginger tea for Con, we learned about the confusing charges the bill. A 10 percent tip is added; 23 percent for alcohol, 8 percent on most other foods and items, and 5 percent on unprocessed foods. Depending on what you order, you may have a series of tax lines. 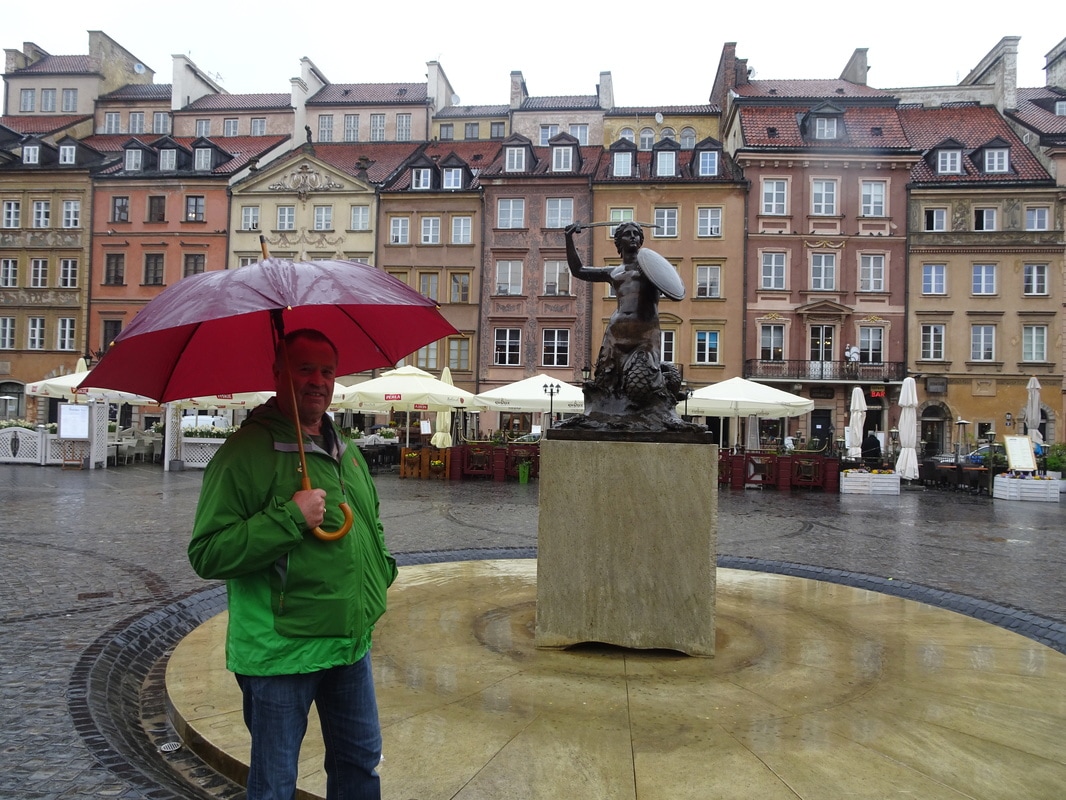 April 29 -- By 2 pm, we'd put more than 12 kilometres on our feet visiting the Warsaw National Museum, walking to the Royal Lazienki Palace, and back to our apartment. The sun even made a showing today, for about five minutes. The National Museum was an enjoyable and exhausting walk through European and Old Polish art and sculptures dating from the 15th - 18th century. The Royal Lazienki Palace, built in 1674 is also known as the Palace on the Water and the Palace on the Isle located in the middle of a lake known as Warsaw's Royal Baths Park. The park is gorgeous! It's 76 hectares in the middle of the city dotted with a few palaces but surrounded by the most spectacular trees. During WWII, the Germans drilled holes in the palace walls preparing to blow it up but never got around to carrying out the destruction. The Palace is pictures below and the picture credit goes to: By Mariokol - Own work, GFDL, https://commons.wikimedia.org/w/index.php?curid=15216727 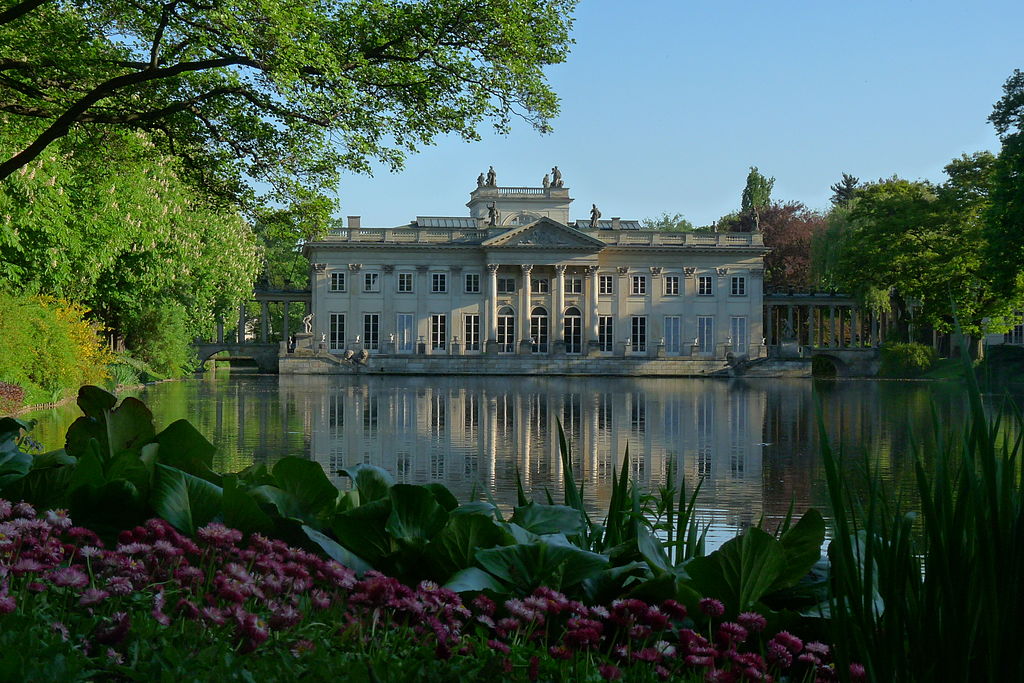 Below, a few photos from the National Warsaw Museum.
Below, photos from the 76-acre inner city park, and the Royal Lazienki Palace.
April 30 -- Train to Krakow
We booked two seats on the train to Krakow for a four-hour journey from Warsaw, arriving as the sun rays shot through the rain clouds. Krakow is winding up to celebrate this week, with tomorrow (May 1st) Labour Day, a national holiday in Poland. It's a big-deal event as the Poles party. It's a bit odd, since May 1st was a celebration for the communists to parade their socialist methods. Today, the people celebrate with parades, concerts, and food. Wednesday, May 3rd, is Constitution Day, a complete contrast to the communist celebration as it's Poland's celebration of its independence.

Ten years ago, when we visited northern Poland and observed people devouring thick pieces of bread spread generously with lard. Some things never change...
In our opinion, there are two foods the Poles cannot live without: meat and ice cream.
The Vistula River runs through Krakow, (the longest and largest river in Poland) and with all the rain, and anxious bikers, you can imagine the scene when the river ran too high.
At 10 am, we joined a walking tour of Jewish Krakow. Poland was a place where Jews and Catholics lived peacefully side by side for generations. Jews had been present in Krakow from the very beginning of the city's birth. The King at the time recognized the benefits of Jewish people since they were usually very educated, were successful merchants, and held high-paying jobs which created an excellent tax base. Krakow was a place for Jews from all over the world to come find their spiritual roots. Jews represented 25 percent of the population of Krakow before 1930. After the Holocaust, any surviving Jews had a choice to emigrate (mostly to Israel or the USA) and since the soviet communist regime moved into Poland on the heels of the war, they choice to emigrate. Up until about 10 years ago, there were less than 100 Jews in Krakow, a city with a population shy of one million.
Our visit to the Auschwitz concentration camp was difficult, leaving us emotionally drained. At first, Auschwitz was constructed to hold Polish political prisoners beginning in 1940 but went on to become the Nazi's Final Solution to the Jewish problem. From 1942-1944, trains arrived delivering Jews to the camp first to work if they had enough strength, but eventually to be gassed to death. An estimated 1.3 million people were sent there and approximately 1.1 million were murdered, 90 percent were Jewish.
May 4 -- To Nowa Huta and then Wieliczka by car
Checking out of our Krakow hotel, we ducked into our rental avoiding the rain which has visited us every day since our arrival in Poland -- except maybe one day. Temperatures keep us dressed in layers. Today, as all days, I'm wearing three tops and two scarves along with my coat and gloves. Con too, is wearing many layers. It doesn't "dampen" our visit here in beautiful Poland which is even more spectacular as spring is blooming around us. Our first stop is Nowa Huta, the "bastard child" as the Polish reference it, the huge in-your-face communist suburb referred as the "Socialist Realist suburb". It was built in 1947 and is the opposite of Krakow with the beautiful Gothic, Renaissance, or Classic built palaces, churches, cobble-stone streets... "It's the direct antithesis of everything cuddly Krakow is," the tour book says. But, that was the communist way. The Soviet Union funded this city, first by gobbling up a huge portion of agricultural land and a few ancient cities. We are on our way to see what life was like under Communist Rule. Stay tuned...
Above are two photos from the Polish Soviet-era prototype-built city of Nowa Huta. Like the author suggested, there's not much there. The most interesting part of the city was that a statue of Lenin was erected in the centre of the traffic square at the far end of the boulevard pictured above. When communism fell in the late 80s, the people tried to take the statue down with no luck, then they tried to blow it up only scaring a man sleeping near it -- to death! Eventually a crane carried it away for a man from Sweden who purchased it. The people of Nowa Huta then named the square "Ronalda Reagana" after President Reagan.
In a rented car, we drove to the Wieliczka Salt Mine in the town of Wieliczka south of Krakow. The mine produced table salt from the 13th century to 2007 making it one of the world's oldest salt mines in operation. The unique things about the mine are the statues and chapels the miners sculpted throughout the years all made of salt. We traveled down 135 meters into the earth via stairs where we began the tour. The mine is enormous held together by wood planks and various 20th century additions to the structure for safety purposes, since million of tourists visit there every year. We did, however get to take an elevator back to the top.
Our next stop was the town of Wraclow (or often know by the German name Breslau), the fourth largest city in Poland behind Warsaw, Krakow, and Lodz. We stayed in the beautiful old part of the town just outside the town square and marveled at the architecture and lost count of the number of churches.

Above, a view from the mainland across the river to one of the many islands of Wraclaw. During WWII this city was NEARLY saved from destruction right up until the last months of the war when the German's destroyed nearly 70 percent of the buildings as it was easier to hide from the Soviets in the rubble and also it made it harder for the Soviet tanks to get through the bricks and debris.
May 7 -- Early this morning, we began our two-day trek back to Big Sky. Visit our Sailing Diaries for our 2017 Sailing Season.