May 19 - 21, 2018 we visited Tangier by bus and ferry from La Linea, Spain
May 19 -- And into a completely different world
With our allowable time in the European Union getting squished, we walked to the La Linea, Spain bus station and purchased two tickets ( 2.45 euro each) for Algeciras arriving about an hour later. Travelers to Tangier from La Linea beware, you need to go further than Algeciras for the ferry into the old town. We walked a few blocks to the ferry terminal and purchased two more tickets for 60 euro each for another bus to Tarifa, and then the ferry which sped across the Gibraltar Strait to Africa deposited us directly in front of the medina located straight up the hillside. We entered a completely different world.

The ferry takes you directly across the mouth where the Atlantic meets the Mediterranean, a place with terrific winds and currents. The moment we stepped off the ferry, we were aggressively approached by men ready to help with whatever we wanted -- for an undetermined price. We continually thanked them in as many languages we could (French, Spanish, Arabic) but they persistently followed us hoping to extort some kind of coin for their non-stop chatter about the mosque, medina, restaurants, Kasbah… Exiting the ferry terminal, we crossed the possibly six-lane highway and walked directly up the hill and into the medina. We'd booked our hotel with care seeking a traditional Riad inside the medina, but close enough to reach by foot from the terminal.
Below: Con consulting the GPS, our hotel is straight up the hillside. The other two photos show the terminal where we arrived and the billion euro marina under construction (and empty) to its right. 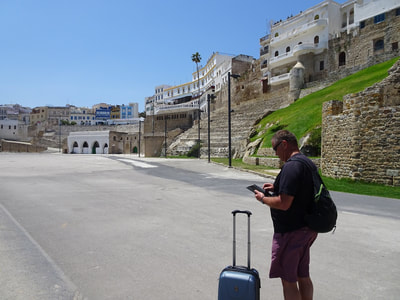 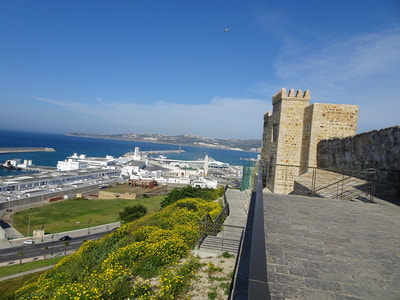 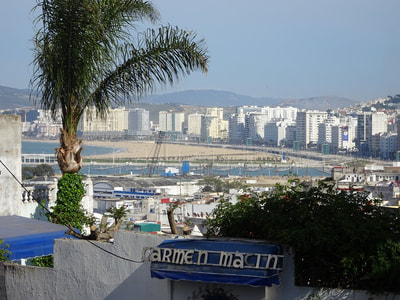 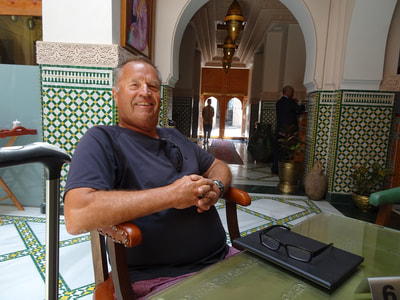 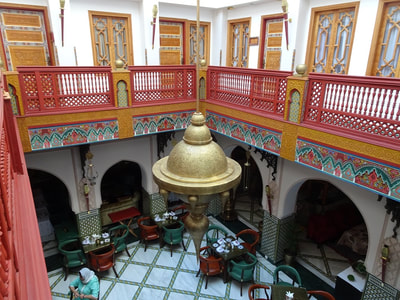 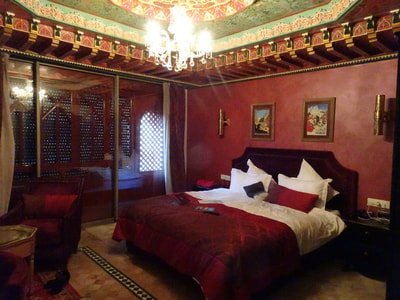 The hotel was about as Moroccan as you can imagine, a first-class Riad fashioned like a palace, appropriately named: Palais Zahai. Our room was rich in red, green, and gold colours with brass ornaments and brass bathroom fixtures, lots of colourful tile, and the far wall was a ceiling to floor window. Just a push of a button and the blinds lifted from outside the windows and the view served as a great vantage point to watch the comings and goings in the medina.
Quickly unpacking, we set off on foot to rediscover the medina with its maze of chaos, cats, smells, cat smells, and best of all interesting north African Arabic people.
Strong Moroccan tea is usually served in colourful tall glasses trimmed in gold with fresh mint shoved inside, surgared a bit too much for me, but all the same delightful. Typically lunch is a tangine of some kind, or koftas. Meats are flavoured in cumin, coriander, cinnamon, and paprika, and chicken in lemon and olives. Breakfast is served with tiny dishes filled with figs, dates, olives, sesame-flavoured breads and sweets. Coffee is always strong and good.  Sorry, we ate everything before sharing a picture. It was Ramadan while there and you can see in the last photo the men sitting at the restaurant with nothing to eat or drink -- not until sun down. 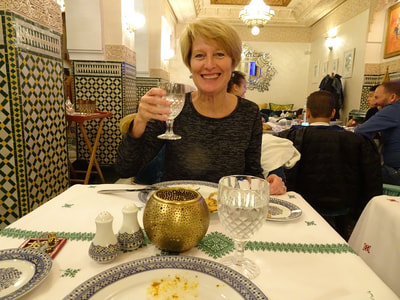 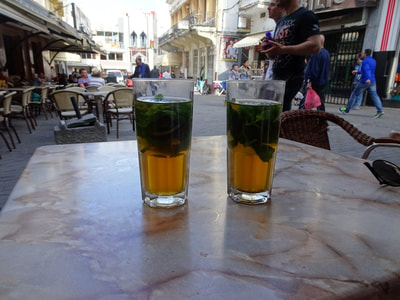 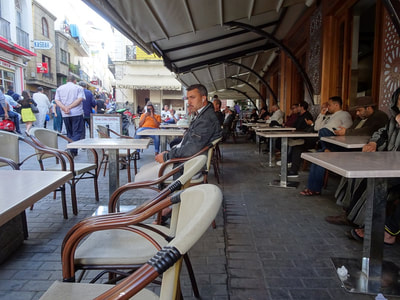 After a full day of walking around, and coming into contact with every would-be tour guide, hoping to lead us to the carpet shop or the Kasbah, and us saying, "No thanks, no gracias, no merci, la shukraane", we woke the next day simply to, "Hi Canada" and no further harassment. 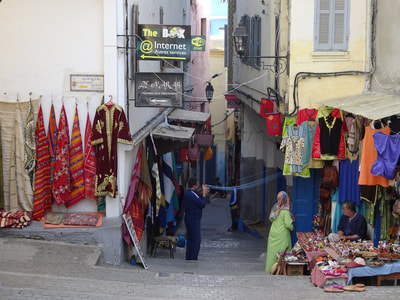 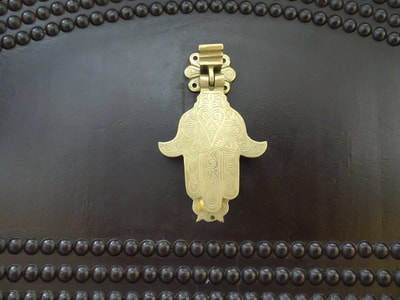 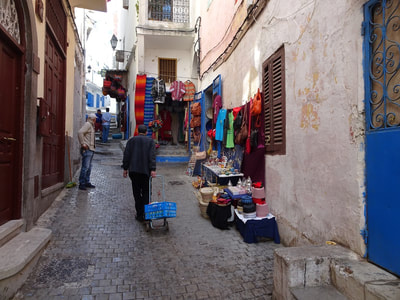 Con Nearly Gets Hauled Away!
Ten years ago we had the best fish fry with a friend we'd met in Ceuta and to this day, my taste buds begin to salivate thinking of it. We attempted to enter the fish harbor in Tangier but were turned away by harbor police. A tall iron gate surrounds the harbor and any traffic in or out is carefully checked by the police looking for potential migrants. We circled the large harbor looking for any way in. At the edge of the water behind the building, we casually strolled passed two officers, who immediately told us to leave. Looking back as we took our exit, we saw three black men handcuffed, pulled out of the van along with two dinghies. Circling the harbor further, we slipped in through a small opening in the gate. The fish fry was nowhere to be found. Hundreds of fishers were sorting through their catch and stitching their nets. Further, we passed a dolly lifting a half dozen enormous swordfish, nearly two meters long (including their beautiful swords). Con took pictures and someone gestured, "Go in," so he did, entering a big warehouse. I opted to remain out in the sun dodging the large puddles of blood.
Con saw at least a hundred large slaughtered swordfish and continued taking photos, until he heard, "STOP!" and turned toward the person giving the command. A large police officer. Con nodded and made toward the door but was barred from leaving. The officer spoke to him in Arabic with great animation and anger was building. Not only from the officer, but Con was then surrounded by a group of angry fishermen! He wasn't sure of his misdemeanor, and volunteered to erase the photos. The officer took his camera and erased all the photos of swordfish, and continued to hold him there, maybe not sure what he should do with him. Con eventually got to the door and took his exit. I had no idea what had happened.
Con said, "Let's go," with a look on his face that I recognized. (It was the same look he had when he returned to the boat hours after leaving to check us out of Kalamata, Greece. He had been nearly arrested for his firm position with a Greek customs agent -- another story.) On our way out of the harbor, we spotted more (but smaller) swordfish, and after looking over our shoulders, Con snapped a few more pictures.
Later we learned that swordfishing in the Mediterranean is carefully monitored as the species is in the endangered category. The EU gave Morocco four million euro about a decade ago to have the fishermen stop using drift nets as it is cleaning out the Med of many other species too. They agreed, and the Ministry of Fishery and the union had two representatives to collect two million euro each for distribution. Turns out, the two were frauds and the fishermen and union received nothing. In addition, the Ministry has received further money from the EU and still the fishermen have gotten the short end of the stick. 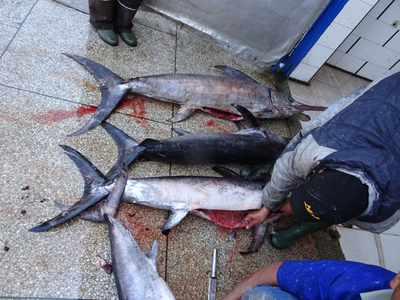 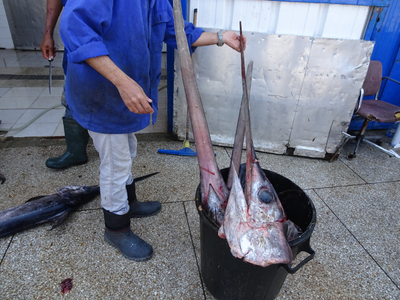 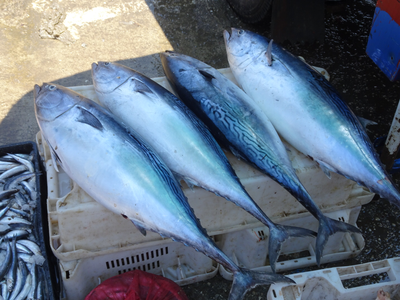 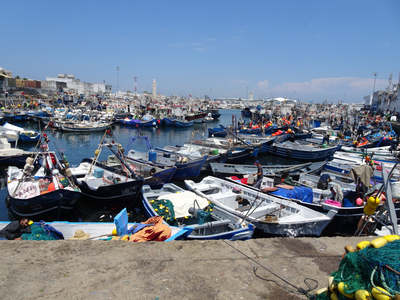 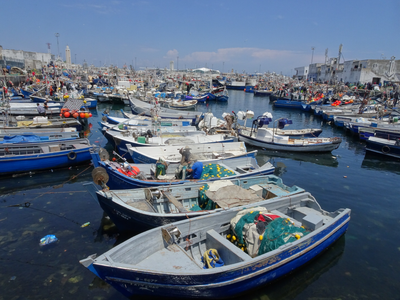 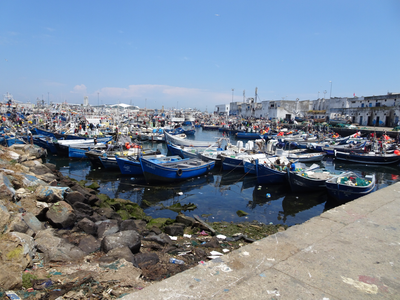 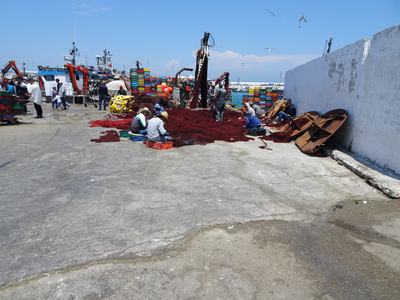 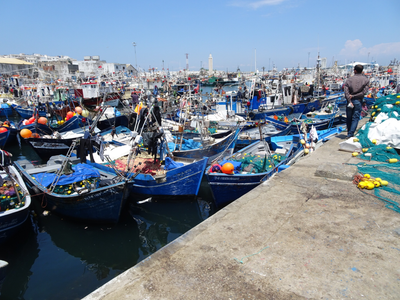 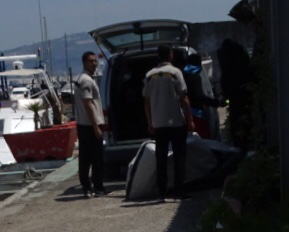 The last photo is where we were turned away by the officers who were handcuffing the three black guys and pulling out their dinghies. Crossing the body of water between Spain and Africa is treacherous, especially near Tangier crossing to Gibraltar as the Atlantic rushes into the mouth of the Med creating dangerous currents. If that wasn't enough, Tarifa, just to the west (in Europe) is so windy they have three separate wind speed references for sailors.
We spent our last day visiting the Kasbah, a beautifully preserved museum of Morocco sparsely displaying their archaeological collections, but having said that, it was just enough. The intricate detailed walls, tiles, ceilings, and doors would rival Granada. 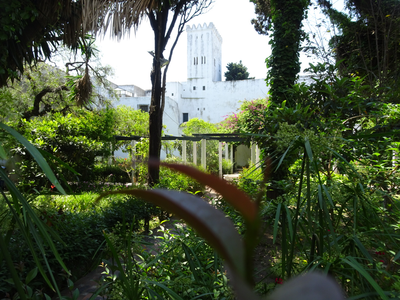 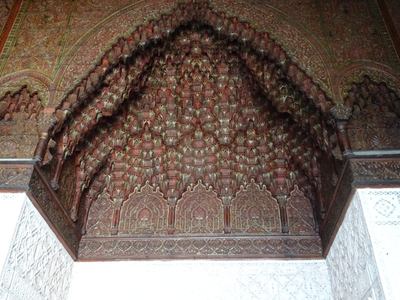 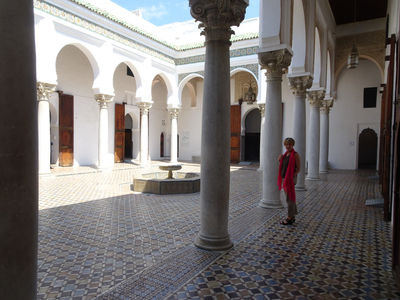 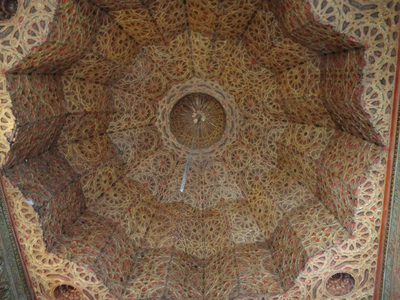 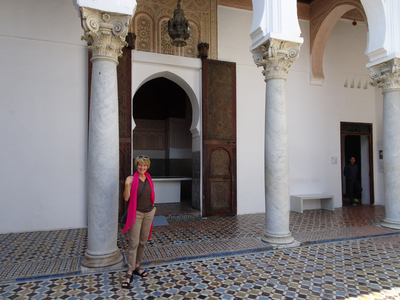 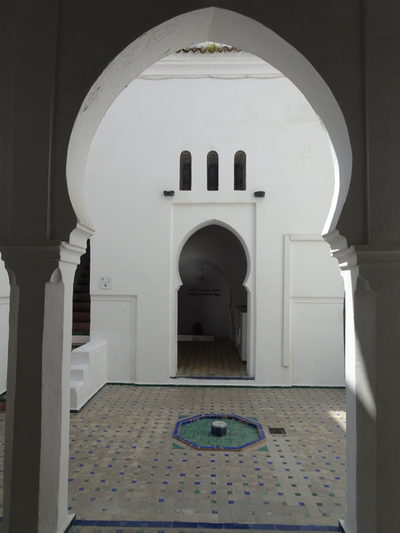 Back to 2018 Sailing Diaries