Our beautiful Big Sky is currently for sale and available for viewing in the Lagos, Portugal Marina.
September 1st, we move into our unique house in Carvoiero, very near the Benagil Beach pictured above and below.
The red marker is where Big Sky is location and to the right is the town of Carvoeiro. 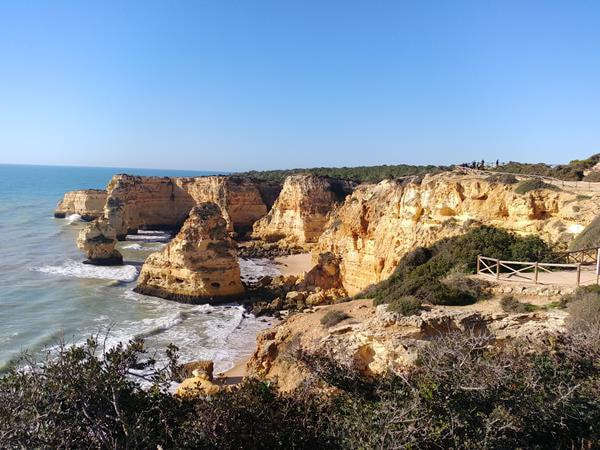 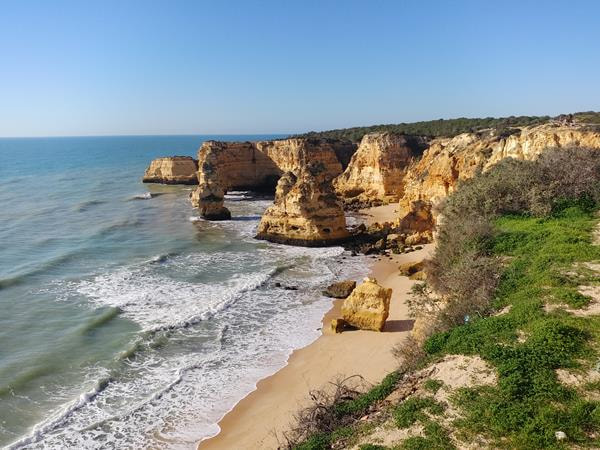 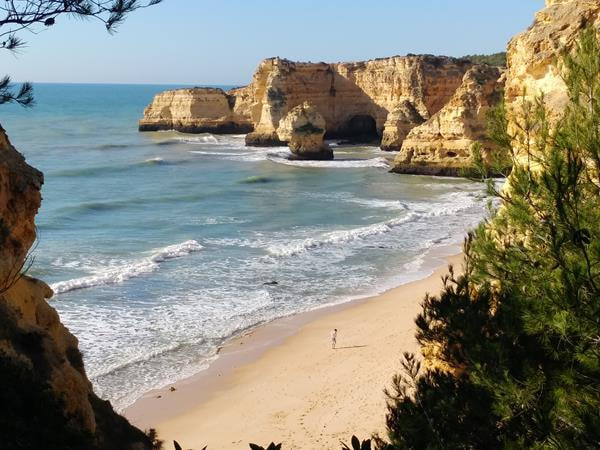 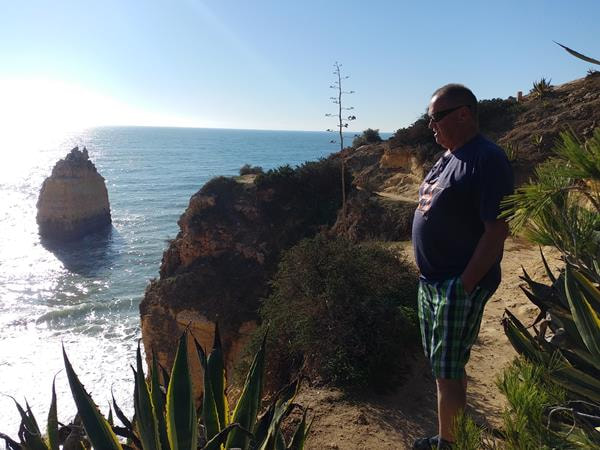 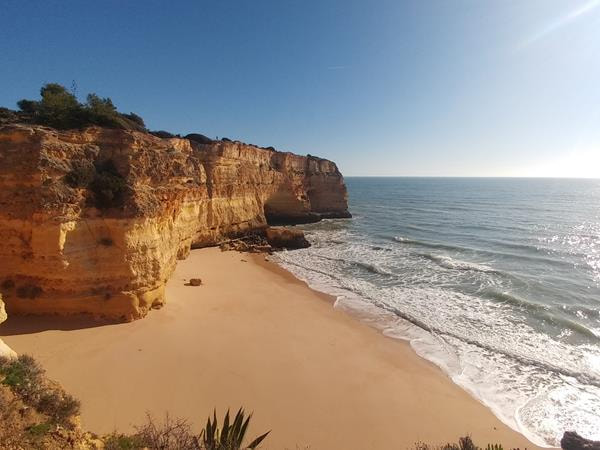 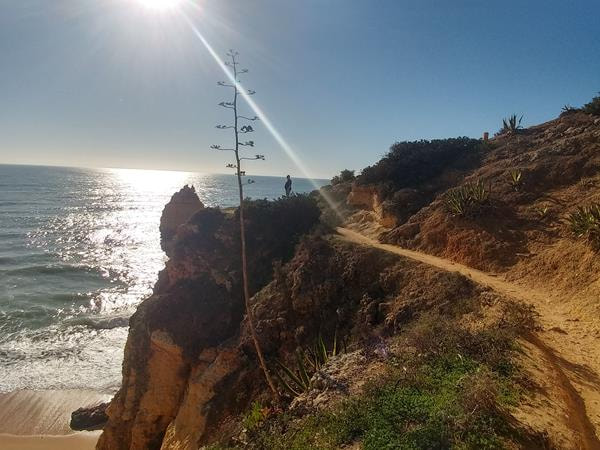 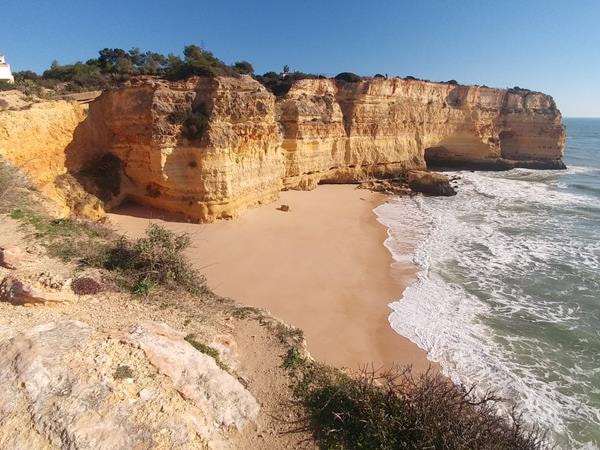 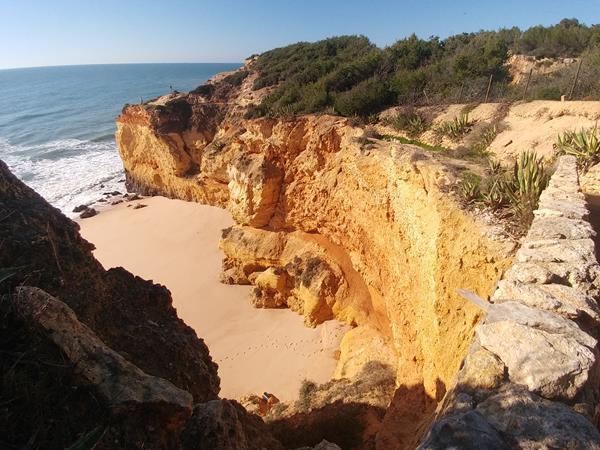 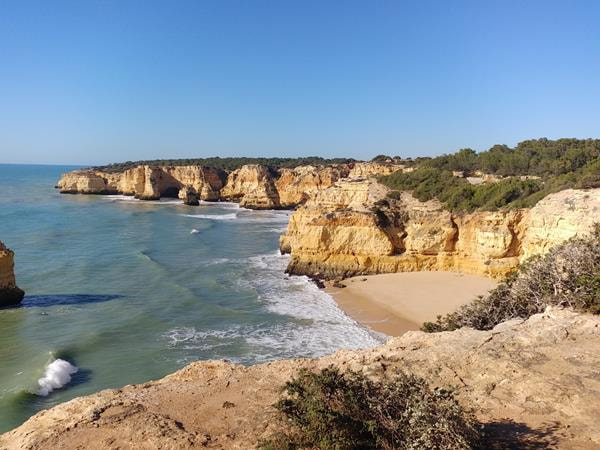 Weather in the Algarve during the winter has been delightful. Con and I took advantage by hiking the trails around the cliffs and caves near Carvoiero. Above are photos from one of the world's most famous beach, Benagil.
January 4 -- Two days ago, we booked a non-refundable flight to Tehran, Iran for a 20-day holiday with my brother Doug and wife Merrilee. We booked the tickets, went to bed and a few hours later woke to the news that President Trump ordered a drone hit on a prominent Iranian General and others in Baghdad. We tried to cancel our flight, but again, it's non refundable. At this point, we are holding onto our tickets and holding our breath that things will calm down. Doug and Merrilee canceled their flight with the help of their insurance. We have wanted to travel to that fascinating country for years and decided this would be a good time. Oops. Stay tuned. 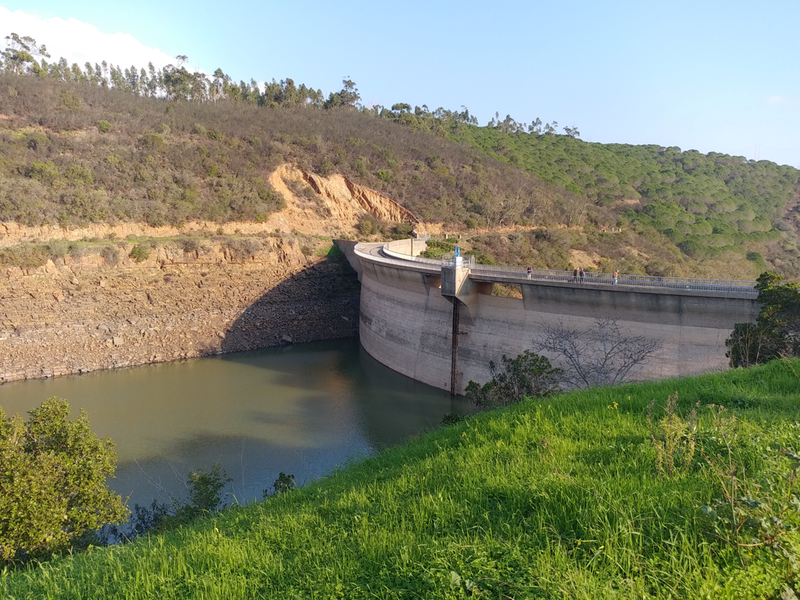 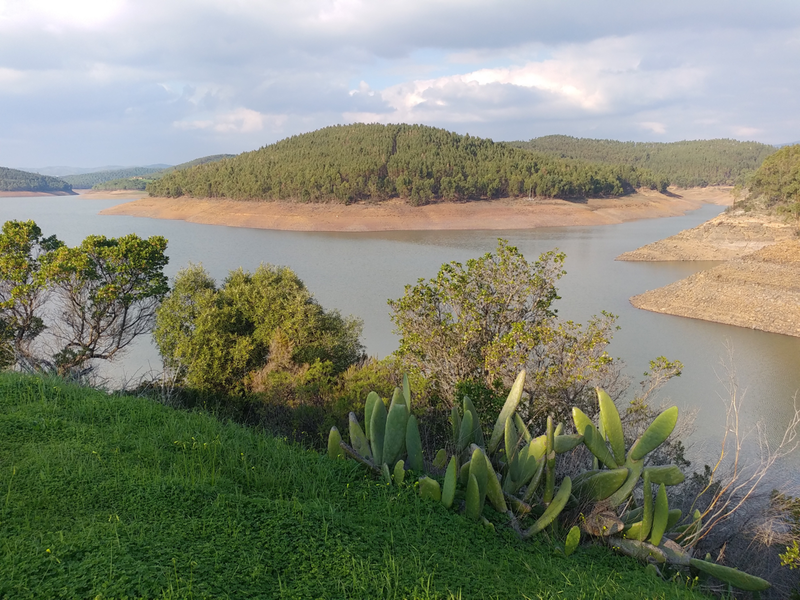 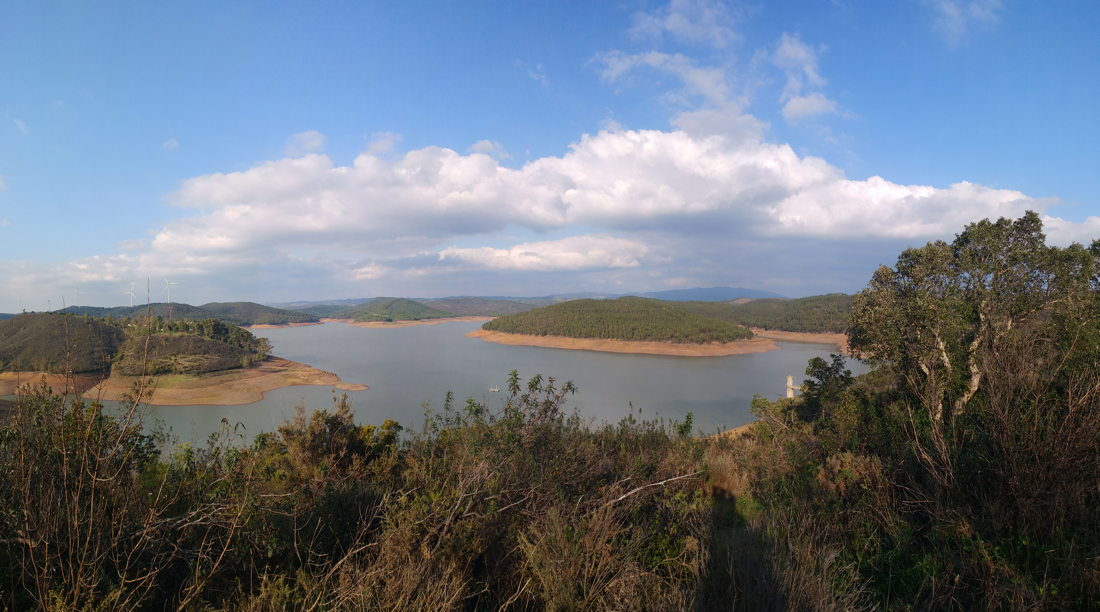 January 5 — Pictured above: Albufeira da Barragem de Oxiaxere
It’s a short drive from Lagos along simple back roads of Odiaxere. The dam was built in 1958 on the Oxeaxere stream. You can clearly see that Portugal needs lots more rain. The rainy season has passed (November and December).
An update about our trip to Iran.
The world seems to be on pause, waiting for the other shoe to drop with the USA and Iran in Iraq. Canada has moved their troops out of Iraq while the USA has put more boots on the ground there. For Con and me, we canceled plans to visit Iran and booked tickets to South Africa. With the help of friends Neil and Sandi in East London, SA and Mike and Debbie (South Africans currently in Lagos) we are putting a dynamite holiday together. We leave February 24 for a month.
January 9 — Retaliation from Iran came in the form of strategically missed missile attacks on USA military sites in Iraq. Two hours following the attacks, a Ukrainian airline left Tehran with 176 people aboard, 68 Canadian and the Iranian missile-seeking equipment shot it down, killing everyone aboard. An accident. We mourn.
Meanwhile, since our government has set an advisory to avoid unnecessary travel to Iran. Hopefully we can get our money back from Turkish Airlines for our non-refundable flight scheduled to Iran February 23 (which we WILL NOT) be taking.
January 10 — To Lisbon for Five Days
At 6:15 pm, we stepped off the train at the Oriente Station with the night darkness closing in. The air was thick with humidity and the skies, we thought, would open up with a downpour. God knows Portugal could use more rain, but it didn’t come. The ride from Lagos to Lisbon was a comfy four hours, transforming us from the laid-back Algarve to the bustling mega city of Lisbon. We crossed the street and arrived at our pre-booked apartment, home for the next five days. After a painful check-in, involving the apartment management unbeknownst to us calling our daughter Lindsey in Canada during her night and early morning trying to get hold of us, we eventually connected with them via email. (We’d given instructions by email that we’d be there at 6:30 and NOT to call.) They showed up at 7 pm with the keys and led us to the 25th-floor apartment overlooking the Tagus River. A small ticking sound was coming from a closet in the kitchen and they asked, “Will that bother you, because if so, we will give you another room,” to which we said, no. With minutes to spare, we raced down the elevator and to the tapas bar where we met up with sailing friends Rick and Mary. After a night of delicious red wine and tapas, we walked back to our apartment. The small ticking noise was somewhat louder. By the time we’d settled into bed, I thought a freight train was running through the apartment. The noise was unbearable. In the morning, I asked management to please fix it or we’ll take that other room. Incredibly, they said, “Well, you said the noise would be okay...” Anyway, they did temporarily fix it.
Also across the street is the Altas Arena where “Corteo” Cirque du Soleil was playing. We’d bought tickets about two months for our first performance. It was quirky, fun, involving Little People (a man and a woman about 3.5 to 4 feet tall, and a giant of a man about 7 feet tall). The troop performed flawless acrobatics on unexpected objects, like beds and ladders. 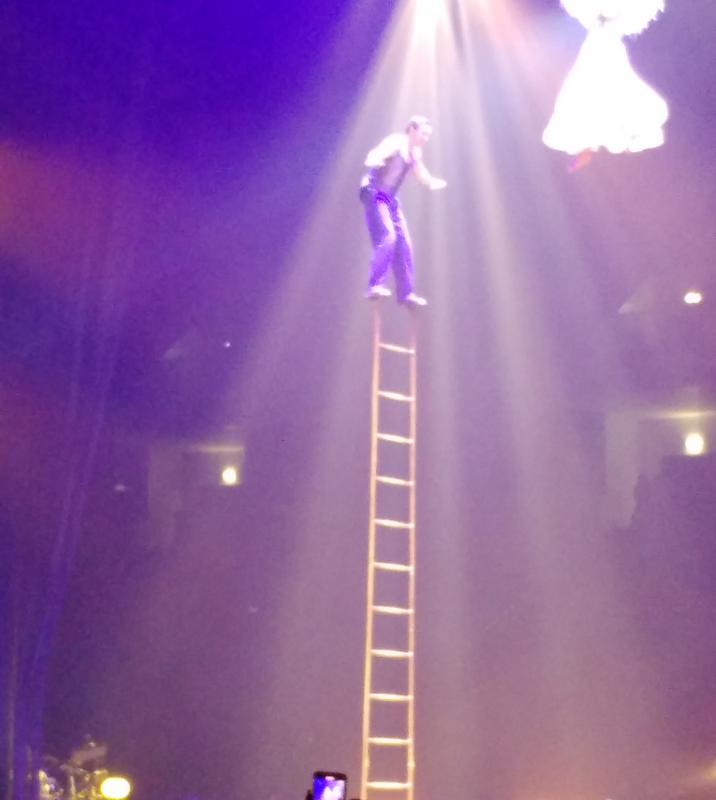 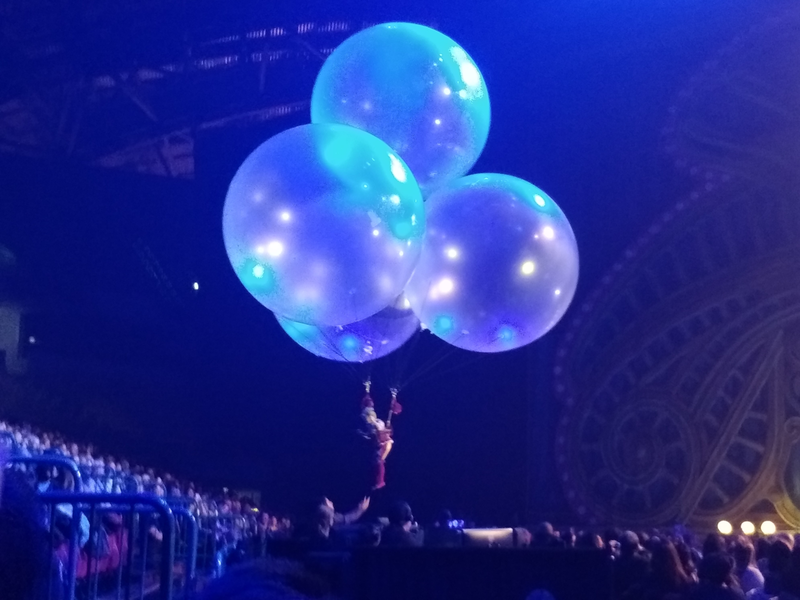 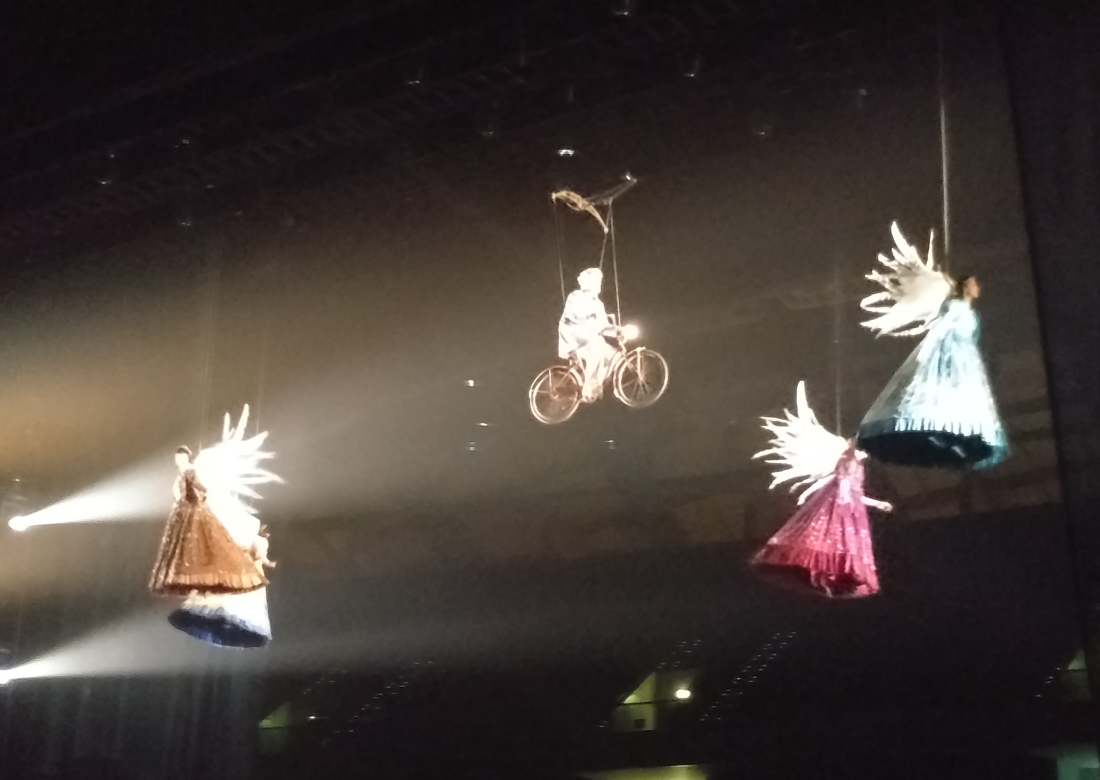 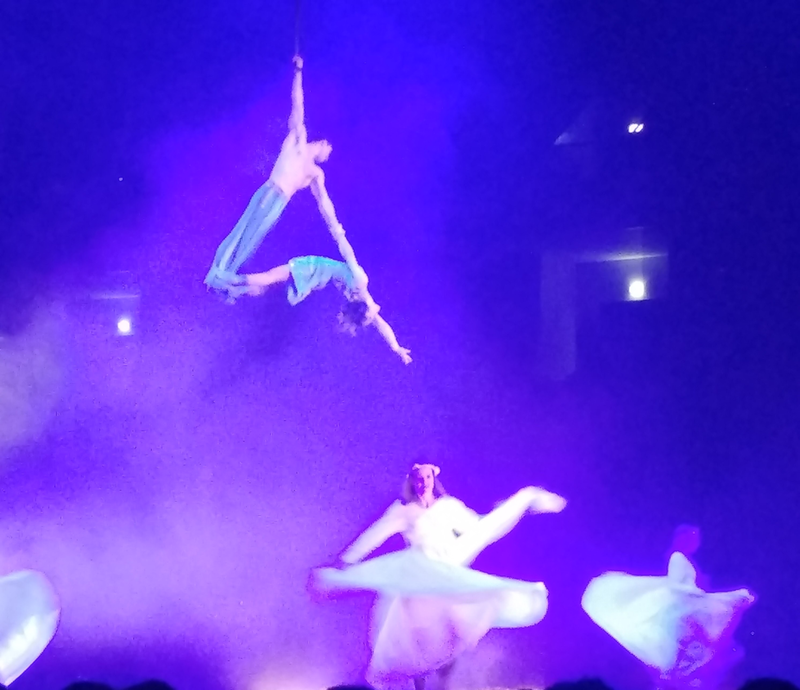 Putting lots of kilometres on our feet, we walked in and out of the old neighbourhoods of Lisbon on a quest to see antique furniture. The prices were scary expensive. For lunch, we chose a small out of the way place packed with locals. I had the dorado and Con the bacalao. Language in never a problem for us no matter what country were in. Today, we sat beside two deaf mutes who carried on a wonderful conversation with us about our healthy choices and that we’d die happy, go to heaven, and most likely sleep peacefully after the half litre of vino verde we drank. Below: the Portuguese parliament building, and the trolly car. The joke is, if two people are on the trolly, one is the driver and the other the pick pocket. 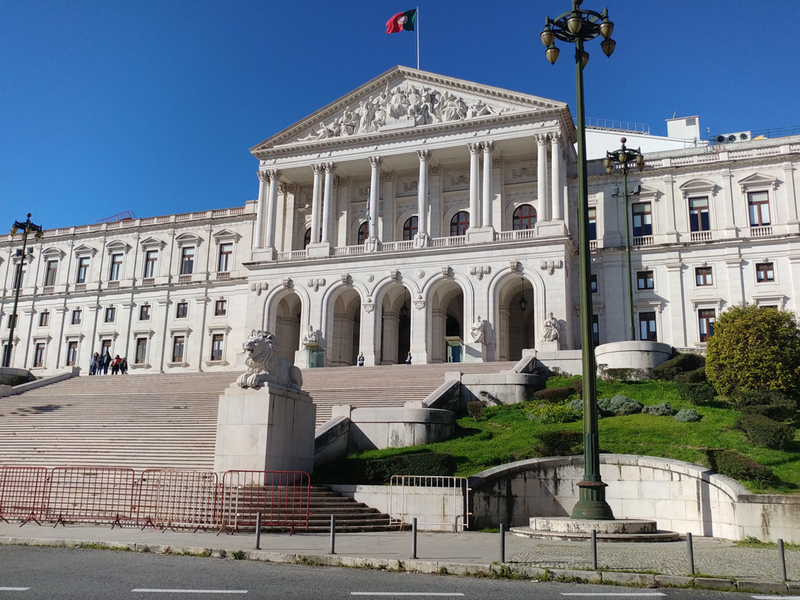 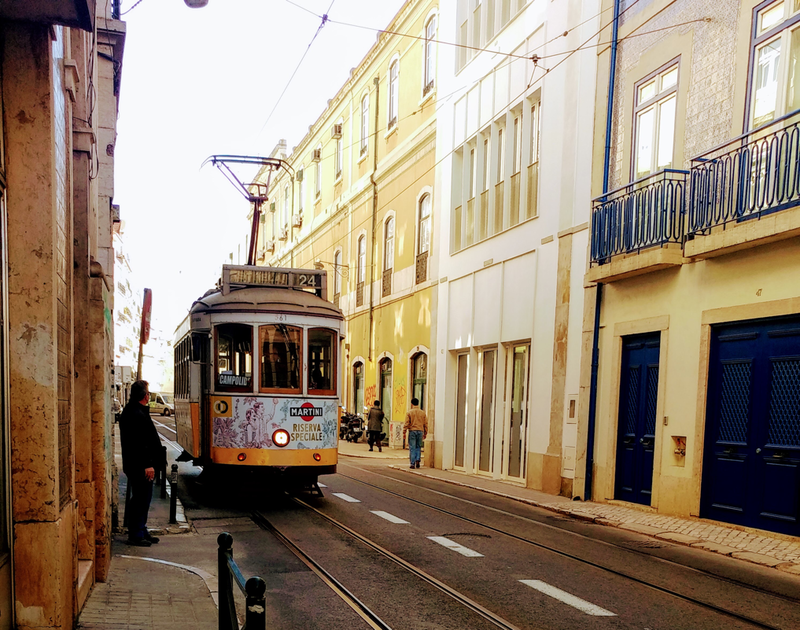 It’s a perfect time of the year to tour Portugal’s capital city Lisbon and to soak up its culture. We traveled by subway to the old part of town and walked the many streets stopping at the plazas to enjoy the statues and water fountains. Our goal was the Carmo Ruins and Archaeological Museum, partially standing following the Great Earthquake, fire and Tsunami.

The Great Earthquake of 1755
An 8.5 - 9 magnitude earthquake with the epicentre about 200 km off the coast in the Atlantic in the waters separating Portugal from Morocco devastated Lisbon and many other coastal cities and towns along Africa’s coast and Europe. Reports say the quake lasted 4-6 minutes creating 5-meter wide gaps in the centre of Lisbon. Survivors rushed to the docks watching the water recede revealing cargo and ship wrecks in the mud. Forty minutes after the quake, the tsunami arrived drowning the harbour, rushing up the Tagus River in three enormous waves. It was November 1st, All Saints Day. People had lit candles in their doors and in the churches which were knocked over starting fires across the city turning it into a fire storm that burned for hours asphyxiating people. This was the first earthquake studied by scientists of the time and led to the birth of modern seismology and earthquake engineering.
Almost all of the coastal towns of the Algarve were heavily damaged by the tsunami except Faro as it’s protected by the sandy banks of Ria Formosa. In Lagos, waves reached the top of the city walls, about 2.5 stories high. Water raced east sweeping the Andalusian destroying the city of Cadiz killing 1/3 of its population! The tsunami was felt in Greenland, the Caribbean, Brazil, England, and North Africa. Below: the ruins of The old Church of Santa Maria do Carmo, founded in 1389. It was the most beautiful Gothic temple in Lisbon before the earthquake. Lisbon was rebuilt in a progressive manner with wide street and open large plazas. The thought was to prevent sickness from living too closely together, but it allowed for modern cars and tourism. 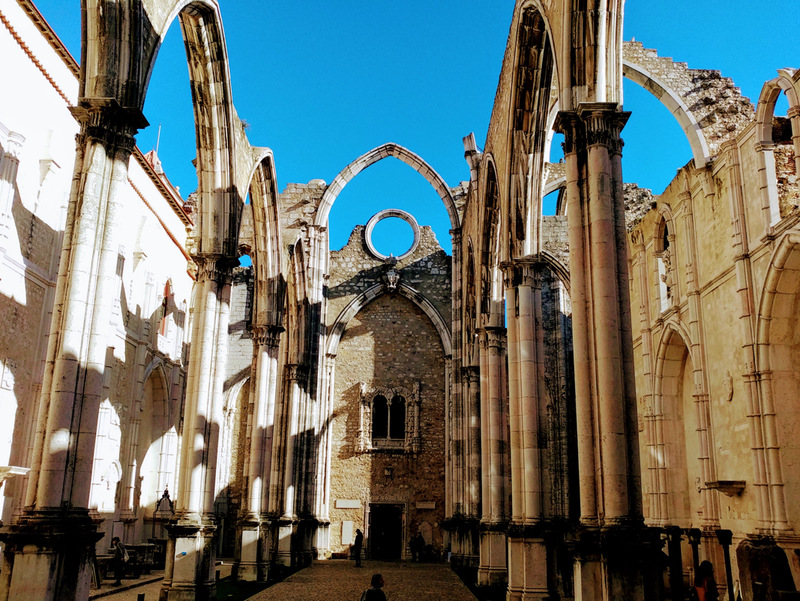 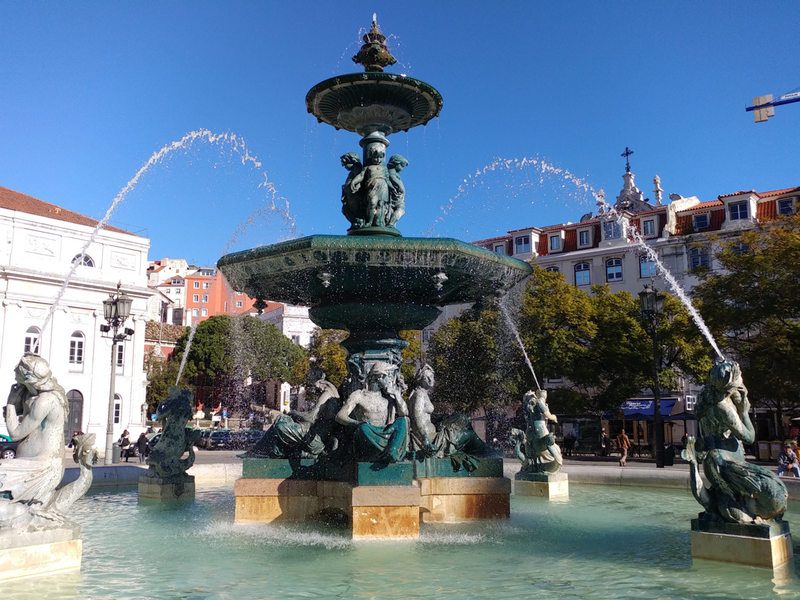 January 17 — Spring has sprung
The reservoir is filling up with a few delightful rainfalls in the last few days. The sun is always shining, except when the rain clouds move in, burst with the much-needed rain, and then move on. The ground is covered in green clover and yellow flowers with a smattering of purple flowers. The almond trees are in full bloom, with their light pink flower peddles spotting the landscape. In the winter, the almond trees are most gnarly tree, appearing ready to crumble to the ground with age and then spring arrives, and they becomes the most beautiful tree out there. They grow in orchards and in the wild sprawling fields. Aboard Big Sky, our poinsettia plants are thriving along with spring flowers in bloom.
Our Canadian families are all in a deep freeze, with temperatures in the -30 to -40 range. It’s very normal for this time of year. Thank you oil and gas workers for keeping the Canadian furnaces running and our families safe and warm. 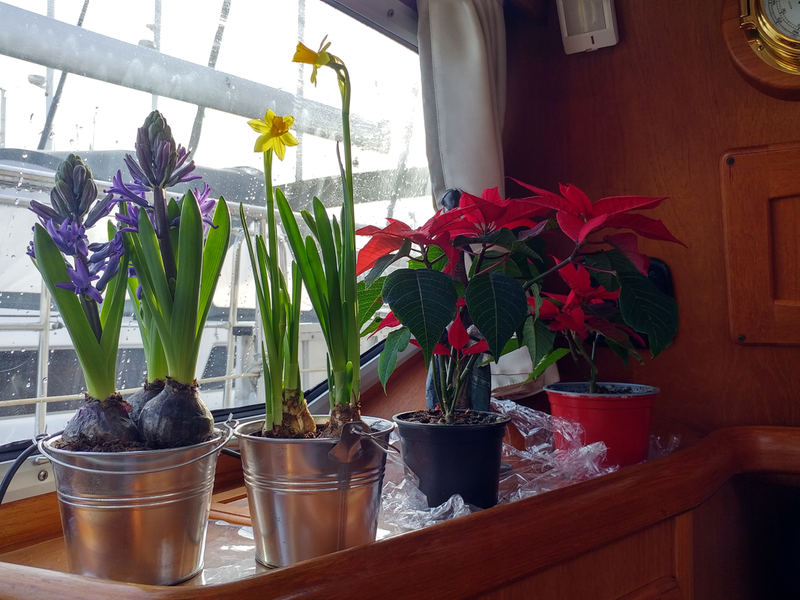 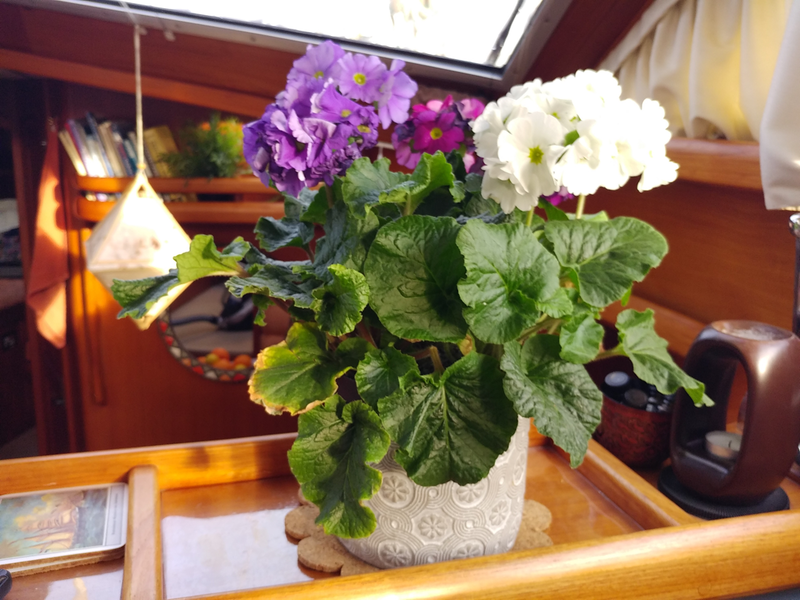 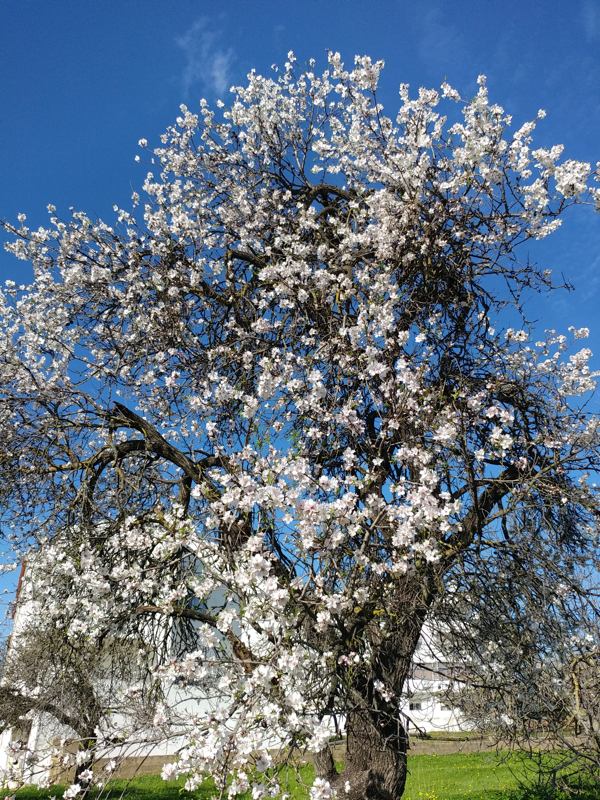 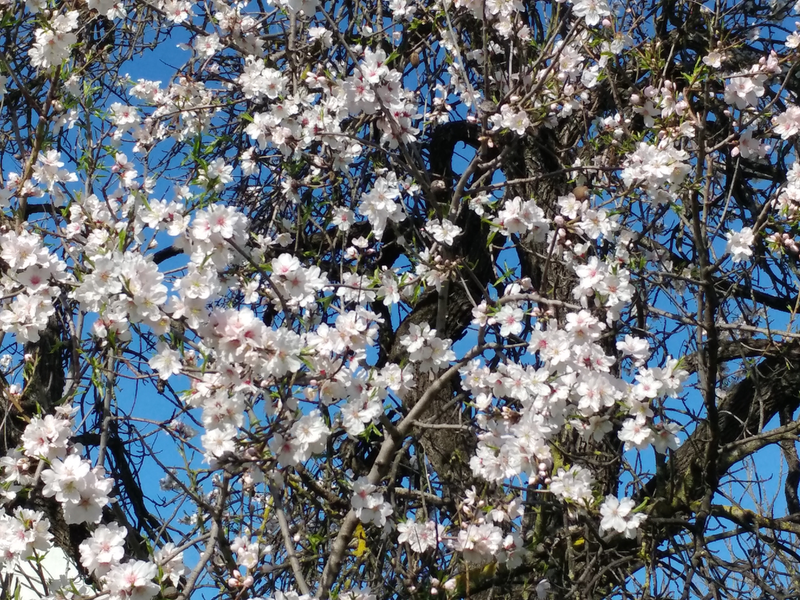 January 27 — Con is on three more days of antibiotics for the surgery he had last week on his mouth. It was intense, a five-hour surgery where he is having his gums strengthen with a product that is made from a pig, followed by stitches and eventually two new implants. Unfortunately, the medication is making him feel sick causing him to be lethargic and with flu-like systems.
Weather has been fabulous interspersed with rain every few days. The reservoirs are slowly filling up for the dry season which will arrive in five or six months.
With our adventure to Iran cancelled, due to political chaos, we booked flights to South Africa, leaving in a few weeks for a month. South African friends, Neil and Sandi whom we’ll visit when we’re there, and Mike and Debbie currently living aboard their catamaran in Lagos, have been incredibly helpful as we plot out our self-guided tour of that country.